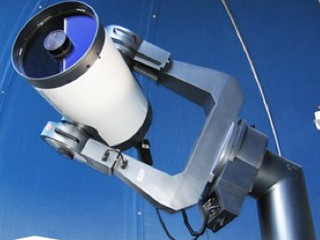 The Institute of Theoretical and Experimental Astronomy (IATE in Spanish), an institute of CONICET (Argentine Council for Scientific and Technological Research) and the National University of Córdoba (UNC), the Astronomical Observatory also from UNC, and the Center for Gravitational Wave Astronomy of the University of Texas at Brownsville are pleased to announce the first successful operation of the TORITOS telescope at Co. Macón, in the Argentine province of Salta.

From April 10 through April 18 a group of scientists and engineers from IATE, OAC and CGWA integrated by Carlos Colazo, Manuel Stark, Matias Schneiter (IATE-OAC) and Martin Beroiz, Mariano Dominguez and Mario Díaz (CGWA) conducted the first successful observational campaign at the Co. Macón with the TORITOS telescope which will function as a pilot instrument for the TOROS (Transient Optical Robotic Observatory of the South) project, planned to start operations at the site in 2016.

The Macón range has been declared an Astronomical Park by the government of the Salta province, and the CGWA, and UNC,as well as the Ministry of Science and Technology (MinCyT) from Argentina and the University of San Pablo, Brasil (ABRAS project) are working to develop the scientific potential of one of the best sites in the world for astronomical observations.

One of the most immediate objectives for this operation will be the detection and characterization of transient phenomena. This search will be performed simultaneously with the two gravitational wave detectors, LIGO, located in the USA, which will start operating in their advanced upgrade configuration in the second half of 2015.