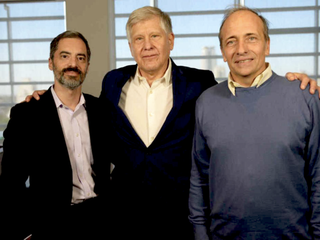 BROWNSVILLE, TEXAS – AUG. 8, 2019 – The National Science Foundation has awarded UTRGV’s Center for Gravitational Wave Astronomy (CGWA) $516,000 for the second phase of construction of a telescope dedicated to research on gravitational waves.

Dr. Mario Díaz – UTRGV professor of physics and astronomy, director of CGWA and principal investigator on this binational project – said gravitational waves are ripples in the fabric of space and time, generated by cataclysmic astrophysical events – like exploding stars, the collision of black holes and merging neutron stars – in the far reaches of the universe.

“There are many challenges associated with searching large areas of the sky for fast-evolving astronomical sources, and this funding is critical for the projects investigated by UTRGV physics and astronomy students, who are now using the recently upgraded UTRGV Dr. Cristina Torres Memorial Astronomical Observatory at Resaca de la Palma State Park north of Brownsville,”
Construction on the telescope – which is physically located at Cordón Macón in Salta Province, Argentina, away from light pollution and other factors that could interfere with the sensitive research – started earlier in 2019 with funding provided by the Argentine National Science Foundation (CONICET) and about $500,000 in NSF funding previously awarded to Diaz.

The telescope is expected to be operational – with some limited capabilities – in early 2020, and is scheduled to achieve design sensitivity in early 2021. Diaz and the team will be able to monitor remotely any observations of deep space events based on alarms released through special LIGO networks.

LIGO – the Laser Interferometer Gravitational-Wave Observatory operated by Caltech and MIT – includes more than 1,200 scientists from around the world and is the world’s largest gravitational wave observatory. In September 2017, the LIGO Scientific Collaboration announced the first joint detection of gravitational waves in the first significant signal recorded.

Diaz’s project began six years when he, Dr. Diego Garcia Lambas, professor of astronomy and director of the Institute of Theoretical and Experimental Astronomy at the University of Córdoba in Argentina, and Dr. Lucas Macri, professor of astronomy at Texas A&M University and associate dean of the College of Science there, launched a collaboration, named “Transient Optical Robotic Observatory of the South,” referred to as TOROS. UTRGV and the University of Córdoba in Argentina since then have signed agreements to develop this bi-national collaboration.
In addition, TAMU professors Darren DePoy and Jennifer Marshall will use a portion of the funds to modify the TOROS telescope, building a “prime-focus corrector” in the Charles & Judith Munnerlyn Astronomical and Space Sciences Laboratory at Texas A&M.
Diaz said this precisely-crafted set of lenses will maximize the field of view of a top-of-the-line camera that will be the dedicated instrument of the TOROS telescope.
“TOROS will make important contributions to the follow-up observation of gravitational wave sources,” Diaz said, “and will help develop the next generation of ‘big data’ astronomers across diverse communities in the Valley, and across Texas and Argentina.”
In addition to Diaz, UTRGV currently has two full-time scientists, 12 graduate and undergraduate students from the Edinburg and Brownsville campuses, and two teachers from local high schools (all members of the Time Domain Astronomy research group), actively participating in the binational project. Local high school physics teachers also are expected to engage area students in this research.

One of the most important and frequent sources of gravitational waves are the collision of compact and dense objects, like two Black Holes. But if one of the two colliding objects is a neutron star – the latest stage in the evolution of stars, and a bit heavier than our Sun – or two neutron stars, space-time ripples will be produced during the event.
However, a strong electromagnetic emission also occurs during collision, because the “breaking” of one of the stars sheds matter, which whirls at breathtaking speeds around the new object being formed. In events of this sort, many of the chemical elements heavier than iron, like gold and platinum, are formed.

Because gravitational wave detectors have poor localization capabilities – that is, they cannot pinpoint the exact position of the source – wide field surveys provided by telescopes like the TOROS telescope could be extremely valuable in generating not only an exact localization of the source, but also other information associated with such events. This information could not be captured by gravitational wave detectors alone.

In recent years, the TOROS collaboration has searched for electromagnetic counterparts to gravitational wave sources using a variety of telescopes across the globe, and pursued funding opportunities to establish their own state-of-the-art CGWA telescope and camera at Cordón Macón, in the remote Atacama region of northwestern Argentina and one of the best astronomical sites on earth.

The University of Texas Rio Grande Valley (UTRGV) was created by the Texas Legislature in 2013 as the first major public university of the 21st century in Texas. This transformative initiative provided the opportunity to expand educational opportunities in the Rio Grande Valley, including a new School of Medicine, and made it possible for residents of the region to benefit from the Permanent University Fund – a public endowment contributing support to the University of Texas System and other institutions.

UTRGV has campuses and off-campus research and teaching sites throughout the Rio Grande Valley including in Boca Chica Beach, Brownsville (formerly The University of Texas at Brownsville campus), Edinburg (formerly The University of Texas-Pan American campus), Harlingen, McAllen, Port Isabel, Rio Grande City, and South Padre Island. UTRGV, a comprehensive academic institution, enrolled its first class in the fall of 2015, and the School of Medicine welcomed its first class in the summer of 2016.